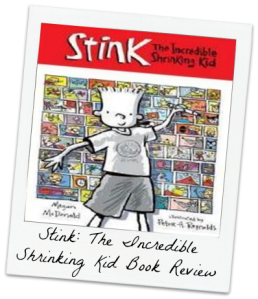 Unfortunately for me, as I continued reading Stink: The Incredible Shrinking Kid by Megan McDonald, my stars given kept shrinking as well.

Stink: The Incredible Shrinking Kid, follows James a.k.a. Stink Moody, the brother of the infamous Judy Moody. In this book, Shrink struggles with being the shortest kid in his class. He becomes further frustrated when his sister measures him shorter one day! With a class pet disaster and biography on his favorite American president, Stink comes to terms with his height.

I was really excited when I stumbled onto this series at my local library. I loved the Judy Moody series was younger, so I thought it was exciting to find a series on another character from those books. My hopes were so high for this book that I even considered checking more out, but since I already had a stack of books in my arms, I decided I would check more of the books out if I enjoyed the first one. My arms are thanking me for not picking up any more because I never became invested in this book.

I actually really liked Stink. I think many children could relate to him and his problems. Compared to how annoying he was portrayed in the Judy Moody books, he wasn’t annoying at all in this book, but really likable. However, other characters from the Judy Moody series really put a damper on this book. Obviously, being moody is Judy Moody’s personality, but it was just a little too much in this book. All of her actions towards Stink came across just plain mean, rude, and annoying.

Like with the Judy Moody series, this book really relies on a series event rather than the characters’ actions. I didn’t have a problem with this in Megan McDonald’s other books because the situations carried the story along. However, most of the events in this book–the class pet, the book report, etc.–seemed to only loosely tie into the book, if at all. Sometimes, the book felt like it was all over the place.

On a positive note, I really liked Stink’s cartoons throughout the book. I think they added to his personality and really set the series apart from the Judy Moody series. I may end up reading the next book in this series to see if my feelings change. However, it is not on the top of my TBR list.

I rate this book two out of five stars.