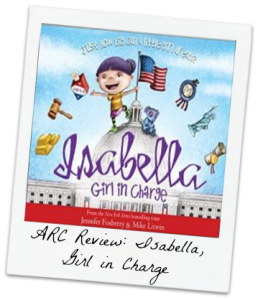 Isabella: Girl in Charge by Jennifer Fosberry follows a young girl as she prepares to leave the house. Through the process of putting on her clothes and eating breakfast, the girl changes to notorious women throughout the history of the United States who were heavily involved in government and politics.

While I enjoyed several aspects that I enjoyed in this book, there were also several aspects that I thought could be improved to give the book’s message a greater impact. First, I’ll start with the books message. I think this book has a great message that is extremely relevant to current issues. Since this book will be released before the upcoming election, I think it ties in well with showing how far women have come in history (even though Hillary Clinton isn’t the first woman to run for the presidency).

I also liked that the book showcased a wide variety of roles woman have played in government in different time periods. A mayor, a Cabinet member, and a Supreme Court justice were only a few of the jobs covered in the book. I also appreciated that when it flashed back to Isabella’s daily routine that there were many plays on words with the job previously listed.

I also enjoyed the timeline at the end of the book that went into more detail about the women mentioned and also mentioned other achievements by women. One problem I had throughout reading this book is that many children reading this book may not recognize these women and be confused while reading the book. I think including a more in-depth look at the end of the book gives this background information without bogging the story down.

There was one other problem that I had while reading this book… the lack of diversity! The only time a non-Caucasian woman appeared was at the end where it showed a woman winning the presidency in the future. I would have liked if more diversity was shown throughout the book and possibly featuring young girls of different races to highlight these accomplishments. These achievements were listed in the back of the book, but I think this book would be more relatable and impactful if it included more information on woman from a variety of backgrounds.

I give this book three out of five stars.

I recieved this book from NetGalley in exchange for an honest review.