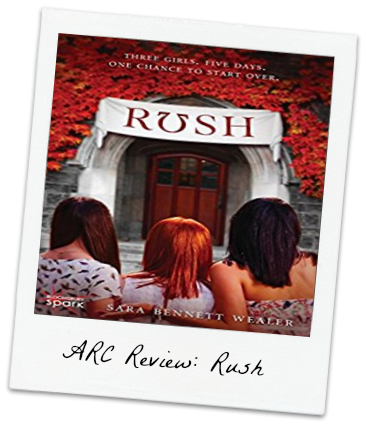 Some things are worth the wait, but you should rush to buy Rush by Sara Bennett Wealer for a realistic (but still dramatic) portrayal of the sorority recruitment process.

Rush follows three girls through the week of sorority recruitment. Maddie hopes to join the most prestigious sorority, Sigma Theta Kappa, to show up the people of her hometown. Imogen reluctantly signs up for her rush to please her mother, a former member of Sigma. Cass, a current member of Sigma, struggles with sorority life as she find herself caught between meeting Sigma’s high standards and her own values.

I think the strongest aspect of this book is the accurate portrayal of the rush process. In the author’s note, Wealer mentions that she was in a sorority (thankfully, much different than the one portrayed in the novel) and her experience on both sides of recruitment really show through. I’m in a sorority at my college and I noticed that in many movies and books, recruitment is portrayed as crazy house parties and dirty rushing. I like how Wealer shows the reality of sorority recruitment and the repercussions when rules aren’t followed.

Another aspect of this book that I enjoyed were the minor characters in the novel. I think the sorority president and a low-income sorority member were really interesting additions to the story. I loved how it gave the girls from the top sorority more personality than being Regina George clones. I actually wish we could have seen more of their perspectives within the novel. The only minor character I had problem with was Cass’s love interest. I felt he was too negative about her interests throughout the entire novel and his sudden change at the end was a little forced.

While there were aspects of this book that I enjoyed, there was also some room for improvement. While I enjoyed many of the minor characters, I felt it difficult to connect and sympathize with the three main characters. I found Maddie extremely annoying because she constantly stated how she looked more like “Sigma” material than the other girls and acted extremely mean when other girls were invited back to certain houses. Without giving away any spoilers, I will just say her behavior at the end made me completely dislike her as a character. As for Imogen, I know sorority life isn’t for everyone, but I thought her constant bashing of sororities was a little excessive and her frequent put-downs of “Park Avenue Princesses” were annoying. She hated sorority girls for acting better than everyone else, but she did the same thing. Out of the three main characters, I thought Cass was the most interesting and likable. I really liked how she stuck to her morals and remained loyal to her friends. However, I think the ending of her story line came across as a little too “Hollywood movie.”

While I think a book on rush is an interesting concept, it also has its drawbacks. Since the book only spans five days, you really don’t get to know the characters beyond the surface level. In addition, you get a -play-by-play of what happens everyday, which sometimes makes the book drag especially if you are already familiar with the recruitment process. I really wish that there could be another book or the book continued a little longer so I could see what happens to the characters after rush. A lot of changes happened right at the end of the book and I wish I had a little more time to see the resolution.

While I really loved the realistic quality and minor characters in this book, I was disappointed with the three main characters and the book’s ending. I give Rush three out of five stars.