Here is a list of all the books that I read this month and my thoughts on them:

Auggie and Me by R.J. Palacio

Katie and the Cupcake Cure (Cupcake Diaries #1) by Coco Simon

Mia in the Mix (Cupcake Diaries #2) by Coco Simon

Alexis and the Perfect Recipe (Cupcake Diaries #4) by Coco Simon

Here are a few life updates:

What was the best book you read in June? 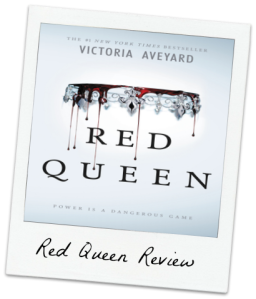 Farley scoffs. “You want me to pin my entire operation, the entire revolution, on some teenaged love story? I can’t believe this.”

Never has a sentence so aptly described my feelings towards a book.

When your status is based on blood color, it should be easy to identify the powerful and powerless. In Mare Barrow’s world, the Silvers rule and control the lowly Reds with their supernatural powers. After a brush with a stranger, Mare finds herself as a servant in the Silver Castle to save her family. A mishap in the arena reveals Mare has a power greater than the Silvers, despite her red blood. To hide her anomaly, the king and queen order Mare to marry their second son. Power is a dangerous game, and if Mare doesn’t learn how to play quickly, she won’t survive.

I’ve heard so much buzz about this book that I’ve always kept it high on my TBR list. After hearing a rave review from a close friend, I decided to check it out of the library. I didn’t hate this book, but it really did not live up to the hype or my expectations.

For the characters, I believed many of them could be more well developed. While this is only the first book in the series, many of the characters fell into the typical roles of the genre. The protagonist, Mare Borrow, resembled a handful of main characters from other similar books, but to me she didn’t have the same spark to stand out (which is ironic since her power is manipulating electricity). For most characters in this book, I could easily switch out the names with characters from other novels and it wouldn’t seem out of place. The only character that really stood out to me was Maven because I felt like he was one of the most unique and developed characters within the novel.

I think one of my largest problems with this book was the romance aspect. I felt like too much of this book focused on the romance, which is kind of strange because the love triangle was very lackluster. Of course, this is only the first book in the series, but Cal and Kilorn failed to make me root for either of them. Cal came across very flat to me and his insta-love and willingness to give up everything for Mare made me roll my eyes. Kilorn fit the perfect boy from home mold and many of his gestures to Mare have been done to death so many times it made me cringe.

Another problem that I had with this book is the pacing. To me, the book didn’t really pick up until the last quarter of the book. Victoria Aveyard did a good job explaining the world in the beginning, but like I mentioned earlier I thought too much of the beginning focused on swooning moments and petty drama with Evangeline. That being said, I really liked the action-packed end of the book and I want to keep reading this series to see if my opinion changes.

I think this book has a really interesting premise, but it fell into the trap of sounding like many other books out there right now. However, since their were some aspects I enjoyed that make me want to continue reading this series, I give this book three out of five stars.

What did you think of Red Queen?