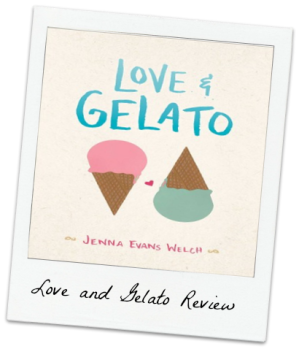 Even though I sadly have no gelato, I have much love for Jenna Evans Welch’s Love and Gelato.

In Love and Gelato, Lina’s mother dies from cancer and as her dying wish, her mother wants Lina to live in Italy with her father that she’s never met. In Italy, Lina receives a journal from her mother’s college days. In the journal, Lina discovers a secret that will change her life forever.

Ever since I read The Juliet Club by Suzanne Harper in middle school, I love reading books that take place in Italy. When Love and Gelato was released last summer, I couldn’t wait to read it. After reading this book, I wanted to book the next flight to Italy! I especially loved how artwork and architecture was incorporated into this book. After taking a humanities class about art last semester, I loved recognizing some of the works I studied within this book.

The plot of this book reminds me of some of my favorite summer movies. Even though the idea has been recycled several times, Welch’s book still stood out to me. Her writing style was easy to read and really captured Italy’s beauty. I loved how the journal helped solve Lina’s questions about her father, but also allowed her mother to give her life advice even after she passed. Lina’s story often mirrored her mother’s, so between finding the right guy or “the dress,” the journal affected all aspects of the story.

My only slight complaint would be that the romance is cute, but nothing special in YA fiction. Ren isn’t the hottest guy, but he’s cute, charming, and willing to do whatever for Lina. However, I really enjoyed reading about how the relationship developed between Lina’s mother and Howard. I actually wanted to read more about their relationship than Lina and Ren’s relationship.

Love and Gelato is not the most ground-shaking book that I’ve ever read, but it’s a cute and fun read. I give Love and Gelato four out of five stars.

4 thoughts on “Love and Gelato Review”