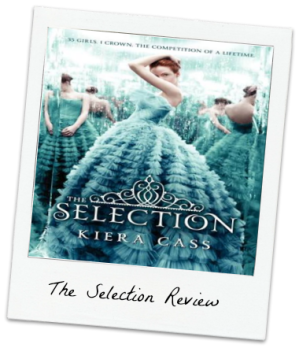 For a fluffy, but fun books with average characters and an average plot, I select The Selection by Kiera Cass.

The Selection follows America Singer, a member of her country’s low artist caste, as the kingdom announces a new competition where one girl will marry the country’s prince. America Singer has no interest in the crown or Prince Maxon because she’s in love with Aspen, a boy from a lower caste. When Aspen breaks up with America and she is chosen for The Selection, America seizes the opportunity to give herself space from her ex-boyfriend. Much to her surprise, America finds herself falling for Prince Maxon.

When it comes to young adult dystopian books with a competition, love triangle, and strong female heroine, The Selection is definitely not the best. However, it is also a book that you won’t be able to put down! The Selection is often described as The Bachelor meets The Hunger Games. While this book may not pack enough action for fans of The Hunger Games, it was definitely please die-hard Bachelor fans.

As for the characters, many come across as flat an one-dimensional. America Singer is a typical YA distopian/modern day Disney princess who shuns dresses, ballgowns, and marrying a prince and is constantly praised for her beauty and musical talents. None of her actions, such as literally telling Prince Maxon she’s only there for the food, really make sense. Like America, all of the other girls fall into stereotypes frequently used on The Bachelor, for example, the small town girl and the villain. Even though the character lacked much depth, I wanted to keep reading about them because I wanted to see who made it to the final few, or The Elite, just like with The Bachelor.

Like with The Bachelor, the relationships between the girls in the competition prove more interesting that the actual love interests. Like with the contestants of The Selection, both of America’s love interests are fairly standard. Prince Maxon is a perfect prince who loves America despite her declarations claiming that she will never love him. Aspen, on the other hand, is the fulfills the boy from home role perfectly. While neither relationship is particularly remarkable, there are a lot of cute moments in both relationships that will satisfy readers looking for a fun and fluffy romance book.

Like many other similar books, this book contains a sub-plot concerning war and invaders. In the first book, this doesn’t play an extremely large role. However, like the rest of the book, it seems extremely similar to other books. If you were expecting a little more depth into this area of the book, then you most likely will be disappointed. Since I was expecting that the book would rely more on romance than war, I didn’t mind the author didn’t focus on this plot.

5 thoughts on “The Selection Review”